And here we are getting back to the conference: 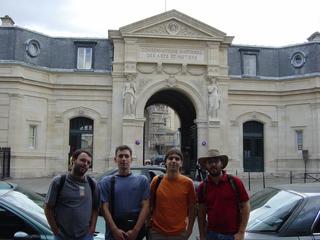 Ok, the afternoon will be spent (until the coffee break at least) on testland.

Test Driven Development in Perl: Where the speaker talks about why testing is good (for 4 slides), and then the slides end and he sits and starts coding tests. Kool!
Random interesting thought on the talk: If you write your tests before doing the code (in the beginning of the project) it ends up being your formal specification, written in a language the computer and you both understand. Latter on the same “document” will be used to prove tht your code actually meets the specifications! How kool is that?

Thomas Maier’s “CLI Automatic Test” on automating regression tests on CLI programs with Perl (Expect stuff and the like).

Coffee break (and a welcome one, the chairs are really awfull in all the rooms…).

Hukins’ “Choosing A Templating System For Your Web Project”: Choosing a templating systems focused on all the people who will use the system as opposed to choosing it based on the technical merits of one system over another;

Jacobsson’s “Visual Effects - Exploring Imager.pm’s dynamic filter loading mechanism” a very fun way of doing very kool things with images with Perl. Just for the kicks. Now, this presentation had the extreme geek value of being fully cotroled by the mobile phone of the speaker, not to mention the awsome effects and graphics he did for it! Bluetooth is a beautifull thing when used right.

Berezin’s “Many modules, three Perls and one UNIX”: On maintaining the 3 versions of Perl on FreeBSD - the differences between them and how they affect FreeBSD Perl. Also CPAN vs. the ports collection (BSDPAN);

and finally, on to

Boumans’ “20 Things You May Not Know About Perl”: Basically an extended lightning talk about obscure, funny, usefull things about Perl.

Just in case someone whishes to see the talks summary, authors’ bios or anything else about the conference, I repeat the URL here: http://yapc.mongueurs.net/.