The meeting went on yesterday evening and this is just a quick note to recap on it.

On a partially related note, I’m not actually sure if I can say I belong to Lisbon.pm. I mean can you belong to more than one Perlmongers group? Being a founding member of Cascais.pm (and 50% of it’s membership) can I say I also belong to Lisbon.pm? Oh well, such are life’s little dilemmas… :-)

So here we all are, except for Pedro Custódio which unfortunately was too far back from the table and so was hidden away by Francisco (and José who took the shot): 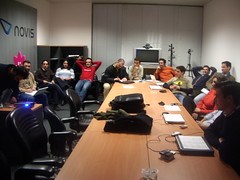